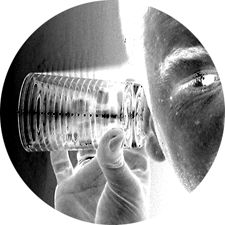 An Exploration in Light Sound and Form. Eves Dropping is an audio installation that consists of a simple set (a wallpapered wall, framing two items of domestic furniture (a chair and a table/dressing table), and a glass tumbler), a speaker system fitted to the rear of the wall, and an spoken narrative recorded on a tape loop.

The narrative, recorded on the tape loop, is of biblical proportions. A suburban couple, he is called Adam, she is called Eve, are deep in argument over each other’s handling of the ‘serpent and apple’ affair, and their subsequent expulsion from the Garden of Eden. Two actors play the couple, and the argument lasts the full length of the tape loop. The speaker system is mounted on the reverse of the wall (probably constructed of chipboard), the sound of the couple is therefore absorbed into the wood and wall paper. Participants are invited to pick up the glass tumbler and press it against the wall and listen as the argument unfolds. The wallpaper pattern portrays a vivid floral landscape, not unlike Paradise. 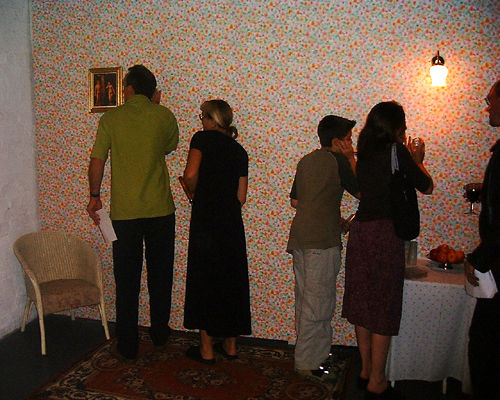