“THE HUMMING OF STRINGS”. 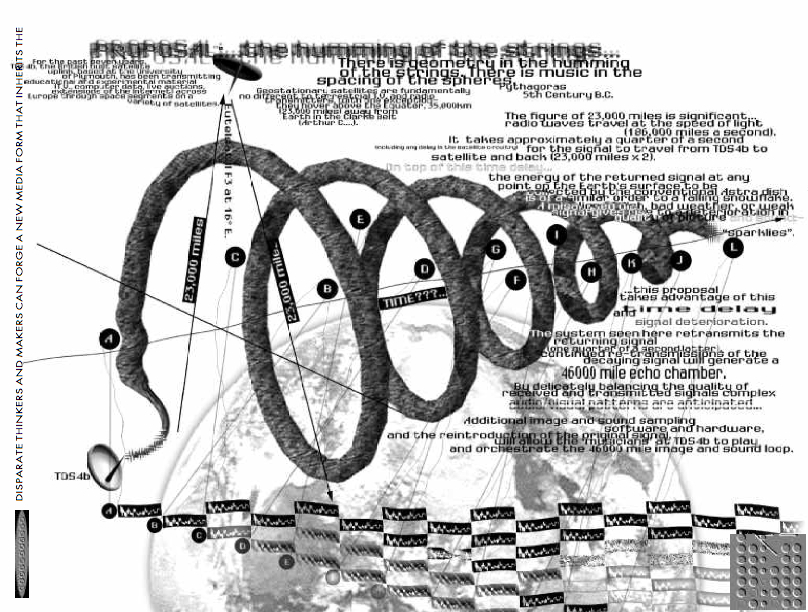 The “Humming of Strings” uses the distance (23000 mile) between the satellite UpLink (ESA TDS 4 based @ Plymouth University) and the Satellite, and back again, (INTELSAT or EUTELSAT) to generate a quarter of a second delay in the transmission and reception of the video signal. In effect this creates a 46,000 mile echo chamber. This is the basic principal of the performances. The processed signals can be received live using domestic satellite reception equipment in a footprint that spans western Europe and over 1000 established institutional reception sites. The performance lasts for 46 minutes, and can be repeated as often as transponder time (cost) allows. The number of performances defines the number of time measures used in the composition.

This proposal was first printed in MEDIASPACE2, Intelligent Tutoring Media Journal Vol 6 Numbers3/4, January. ‘ The Humming of Strings’. Mike Phillips, Steve Roberts. Several technical experiments have been carried out using this system, but as yet it has not been performed before a live audience.

BACKGROUND: This proposal uses the Satellite Research Centre at the University of Plymouth, on loan from the European Space Agency. The author of this proposal has considerable experience of using the facility for distance learning interactive broadcasts. These projects have established around 1000 reception sites across Europe. The Centre has been involved in the technical evaluation of a number of experimental transmissions to communication satellites, INTELSAT and EUTELSAT. These are commercial satellites with transponder capacity that used to be paid for by the European Space Agency and made available to the small number of Universities active in satellite communications. The majority of transmissions are TV broadcasts and research into the data broadcast system for distribution of data to Personal Computers.

SYSTEM: The performer, located at the UpLink site, transmits a pre-prepared, composed video signal consisting of an amalgamation of: academy leader count down; video cue bars; digital and analogue clock faces; time signals; clock chimes; audio count downs. The signal returning to the UpLink (one quarter of a second later) is processed and retransmitted. The delay and the slow degradation of the reprocessed audio-visual signal encapsulates the spatial-temporal relationship of the system.