Short text with about 300 characters

Spectre explores the potential of data as material for manifesting things that lie outside our normal frames of reference – so far away, so close, so massive, so small and so ad infinitum. The spectre of Schwaiger is made manifest from the atomic forces that bind the Schauraum dust. A space dreams. 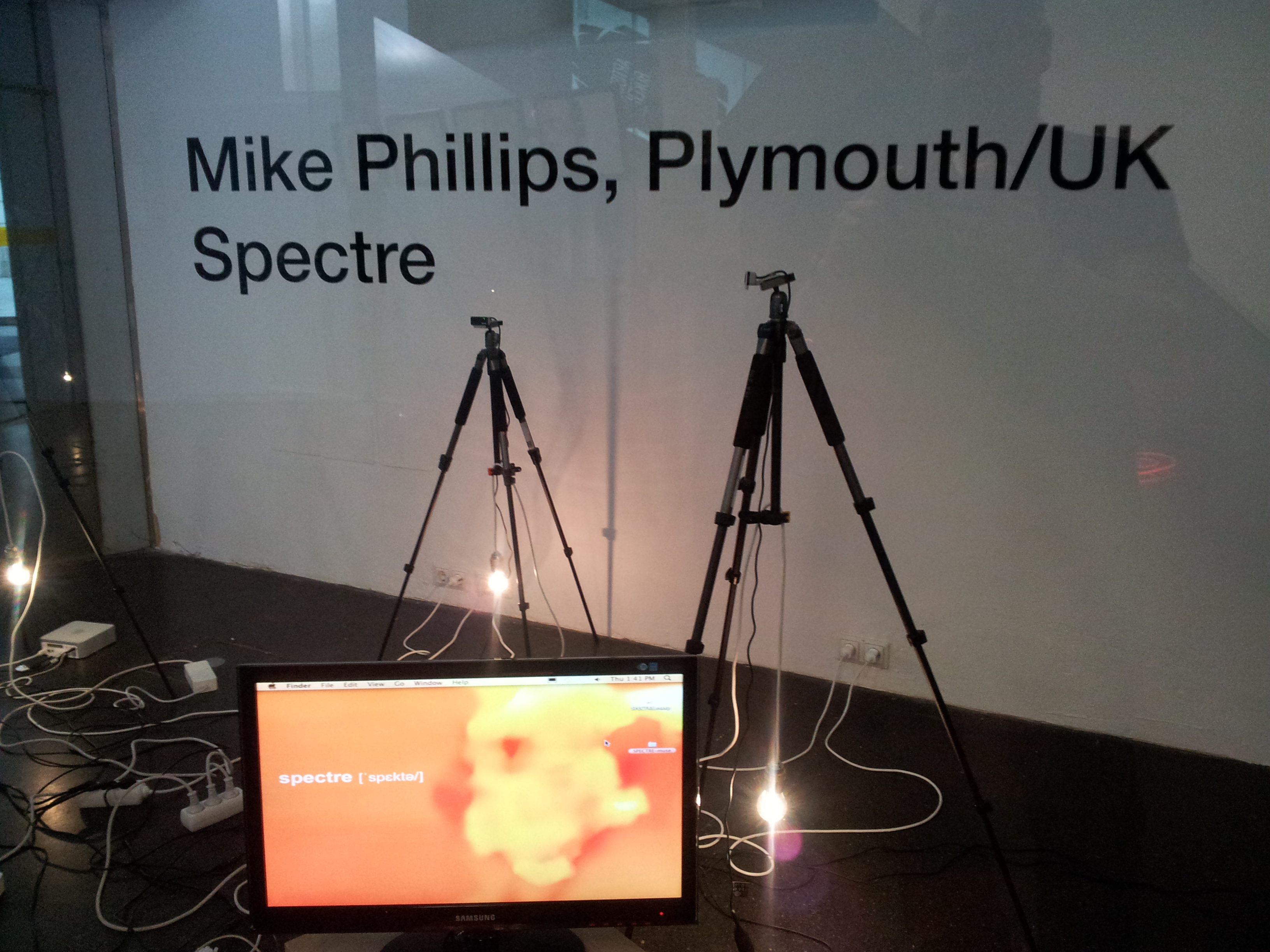 2. a mental image of some entity of terror or dread: the spectre of death…

[C17: from Latin spectrum, literally ‘image, apparition’, from specere ‘to look at’]

Spectre builds on a portfolio of data driven work and ‘nano’ art developed by the artist and collaborators, such as A Mote it is…2 (Phillips, M. 2010) and i-DAT’s Operating Systems1. These projects explore the ubiquity of data streamed from an instrumentalised world and its potential as a material for manifesting things that lie outside of the normal frames of reference – things so far away, so close, so massive, so small and so ad infinitum. These digital practices use alchemical processes that enable a series of transformations: from data to code to experience to behaviour.

The instruments that now do our seeing for us translate their visions through data. The emergence of digital imaging technologies that provide access to photons from the edge of the universe and the atomic force that binds molecules offer us a whole new vocabulary for articulating the world. Atomic Force Microscope, Scanning Electron Microscope, X-ray computed tomography and the Radio telescope open up new dimensions, as more dimensions are unveiled, more realities are modelled and more truths envisioned. There are (to paraphrase Hamlet) more things in heaven and earth than currently dreamt of in our media philosophy.

“A mote it is to trouble the mind’s eye.”3 A Mote it is… explored our relationship with technologies that troubles the mind’s eye. Our ability to shift scales, from the smallest thing to the largest thing has been described as the ‘transcalar imaginary’4. Hamlet’s Fathers Ghost is seen but not believed and one is left to wonder if it is just the seeing of it that makes it real – its existence totally dependent on the desire of the viewer to see it.  The ‘mote’ or speck of dust in the eye of the mind of the beholder both creates the illusion and convinces us that what we see is real. Something just out of the corner of our minds eye, those little flecks magnified by our desire to see more clearly. Yet the harder we look the more blurred our vision becomes. A ‘mote’ is both a noun and a verb. Middle English with Indo-European roots, its early Christian origins and Masonic overtones describe the smallest thing possible and empower it with the ability to conjure something into being (so mote it be…). This dual state of becoming and being (even if infinitesimally tiny) render it a powerful talisman in the context of nano technology.

i-DAT’s Operating Systems5 project was initially inspired by early work exploring the potential of spaces recording events that happened within them. Arch-OS was described as a ‘Psychometric’ Architecture, a viral infection of a building that replayed at night the activities that took place during the day. A kind of dreaming architecture. Psychometry… “The concept of objects (or places) seeming to record events and then play them back for sensitive people is generally referred to as psychometry. The objects can be called psychometric objects or token objects”6 (Morris, R. 1986).

Spectre suggests that the Schauraum is such an architecture and that the memories of the building are bonded to its fabric by the atomic forces that have now been unlocked by the Atomic Force Microscope. Spectre builds on the collision of A Mote it is… and Psychometric Architecture by drawing on the experiences of Professor Gustav Adolf Schwaiger, the Technical Director of the Austrian Broadcast Corporation, and his collaboration with famous medium Rudi Schneider in the late 1930’s to the early 1940’s. “G.A. Schwaiger… conducted some private (and rather obscure) experiments with the famous medium Rudi Schneider in the studio of a female painter… In fact the flat could have been right above our exhibition space (Schauraum).”7 (Fiel, W. 2011).

According to Mulacz’s History of Parapsychology in Austria, “Schwaiger in his research focussed on investigating that ‘substance’ and its effects applied then state-of-the-art apparatus, such as remote observation by a TV set.”8 (Mulacz, P. 2000). That ‘substance’ was the ectoplasm that would emerge from Schneider mouth during their experiments. Spectre extends these experiments by broadcasting live feeds from the space of the Schauraum and simultaneously replaying the physical remnants of these happenings as captured in the atomic forces binding the dust from the their laboratory.

The spectres of Schwaiger and Schneider or the ectoplasm they conjured up are manifest through the Spectre installation. 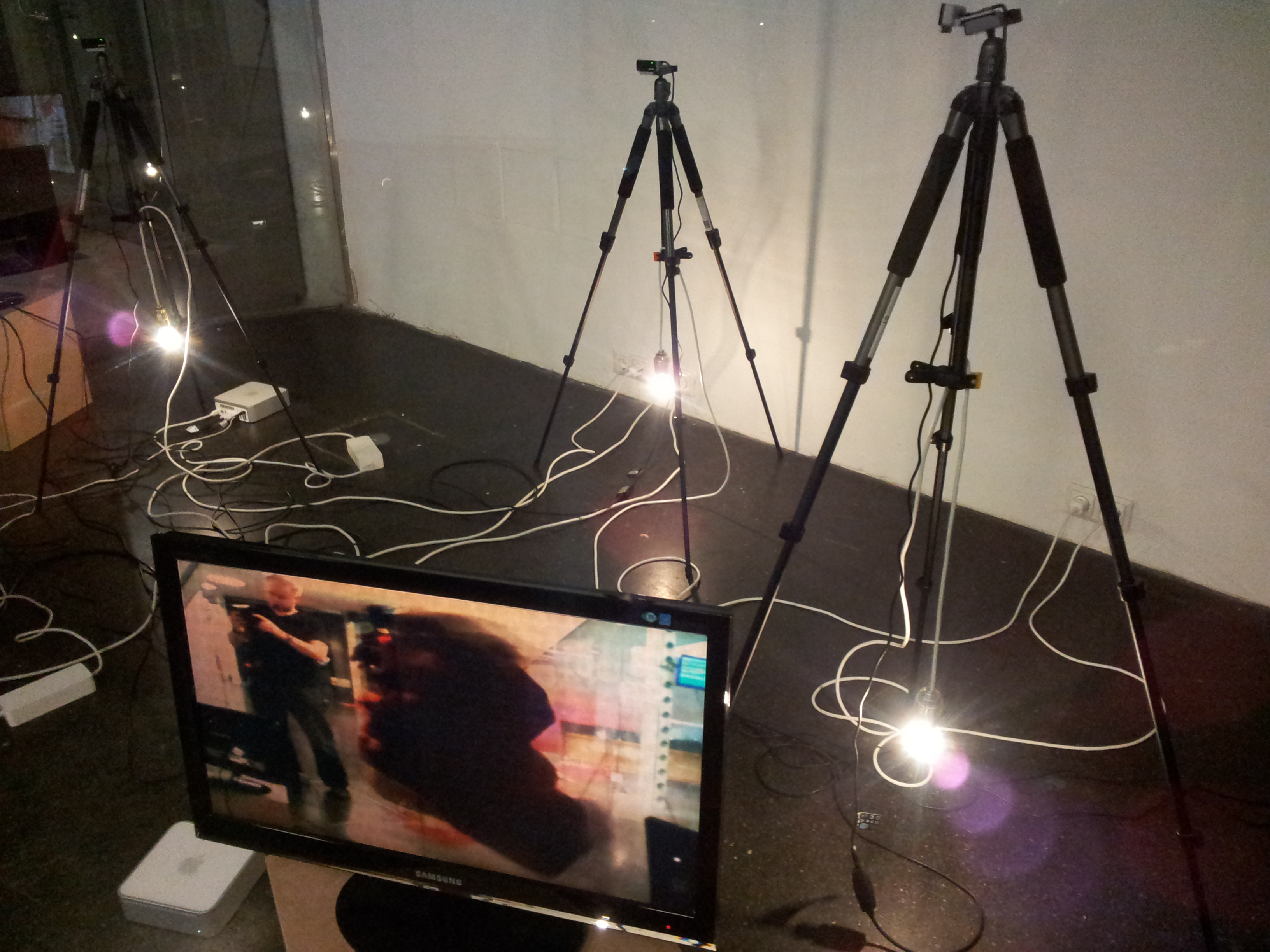 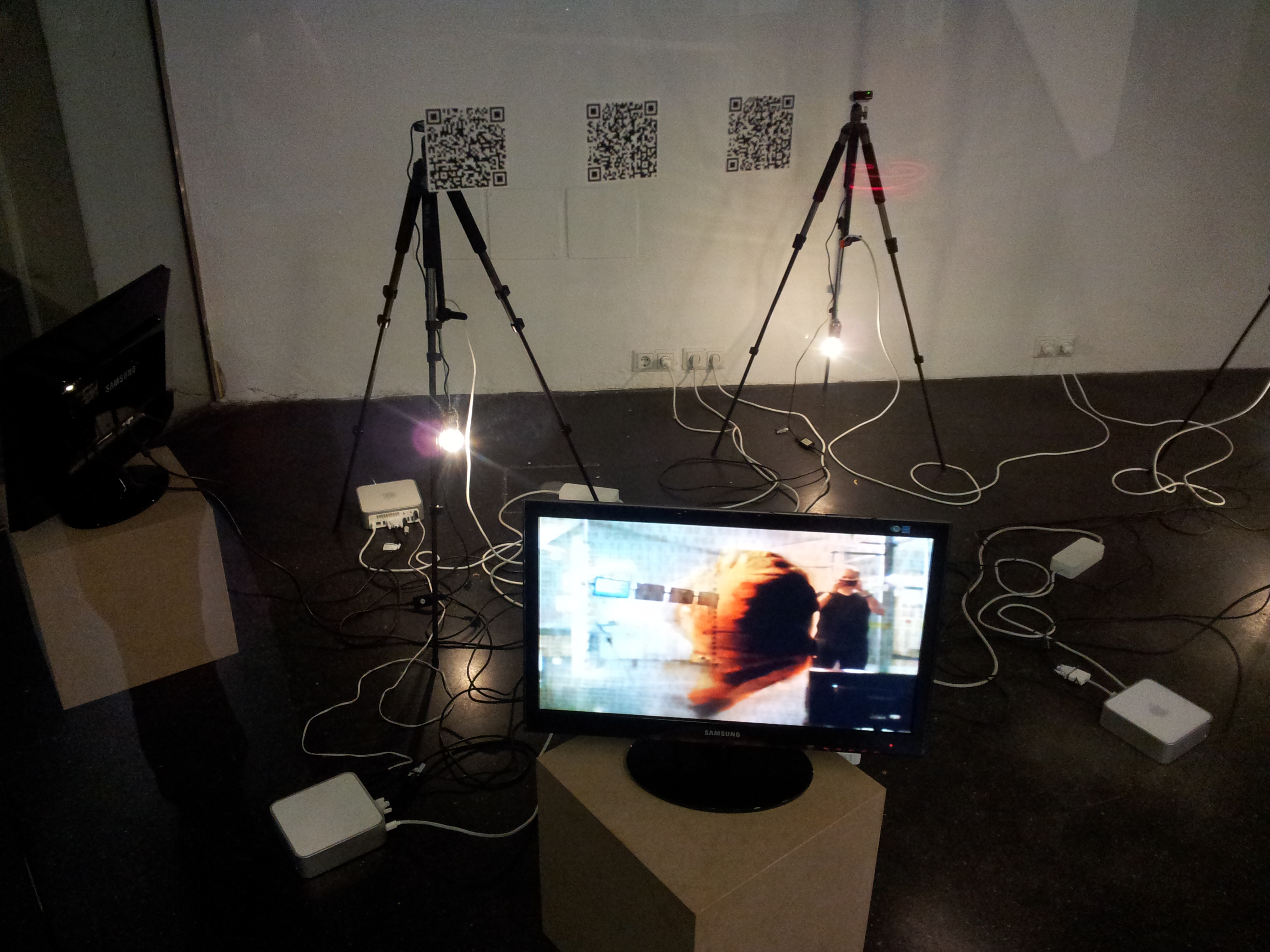 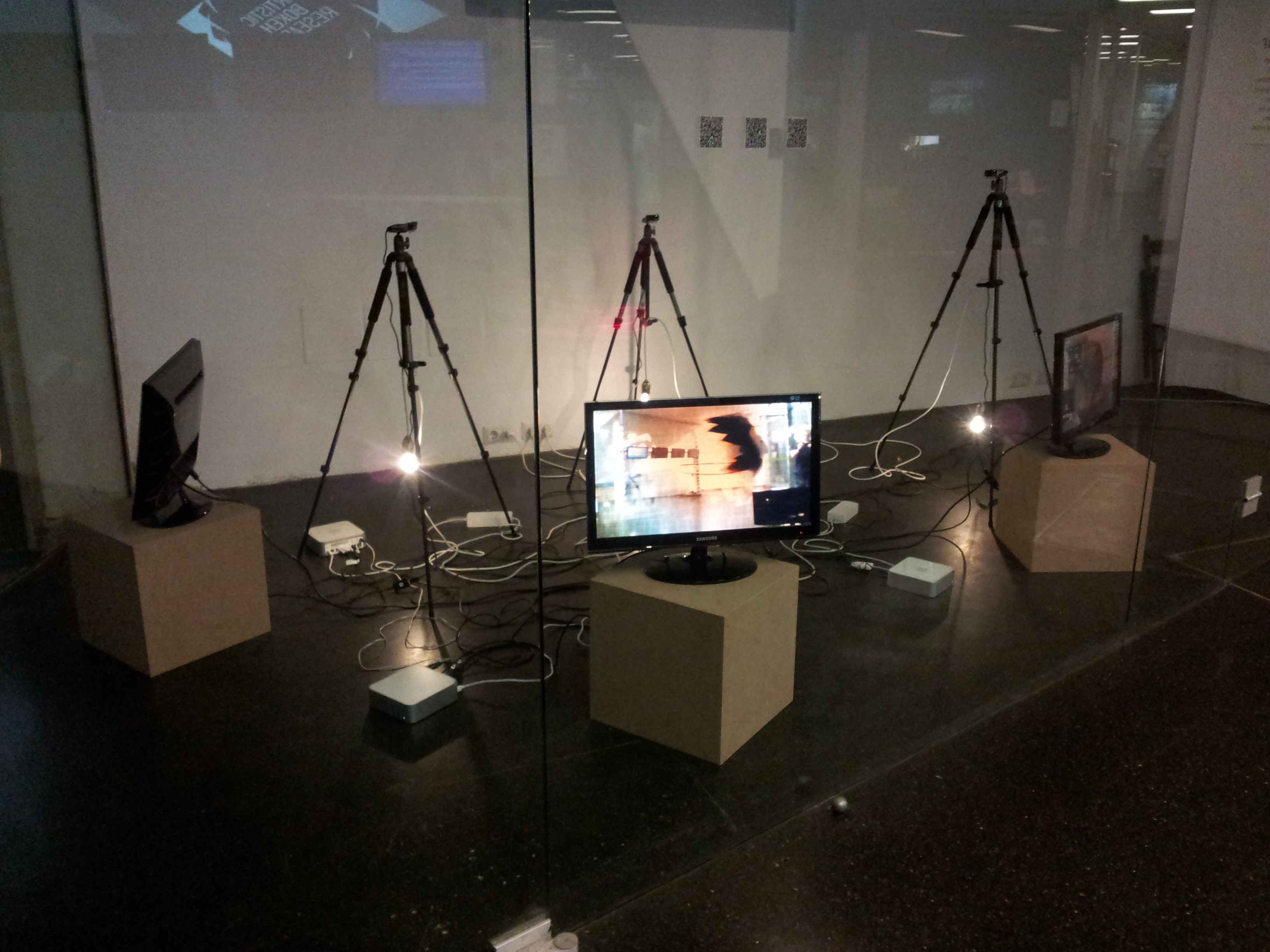 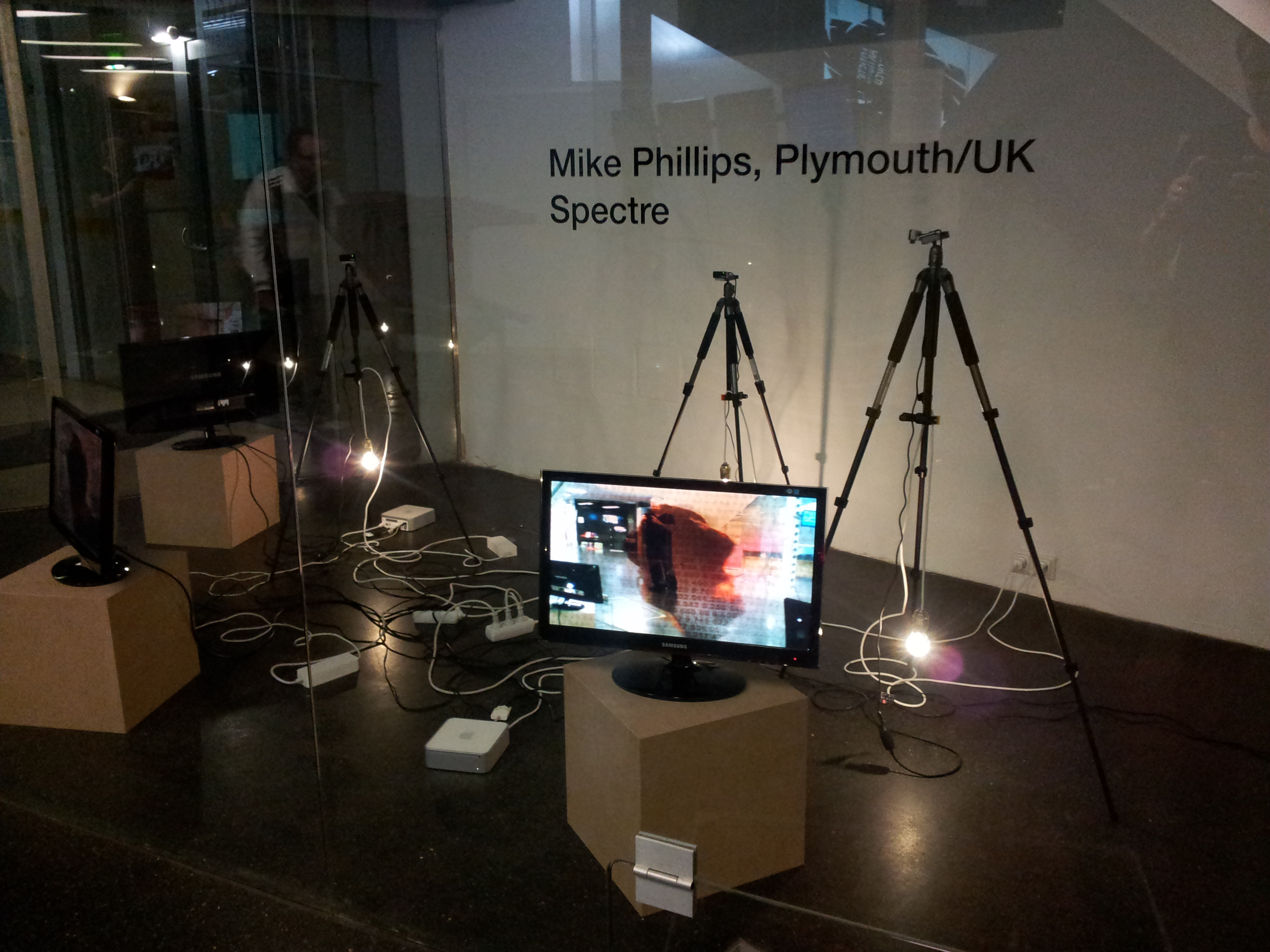 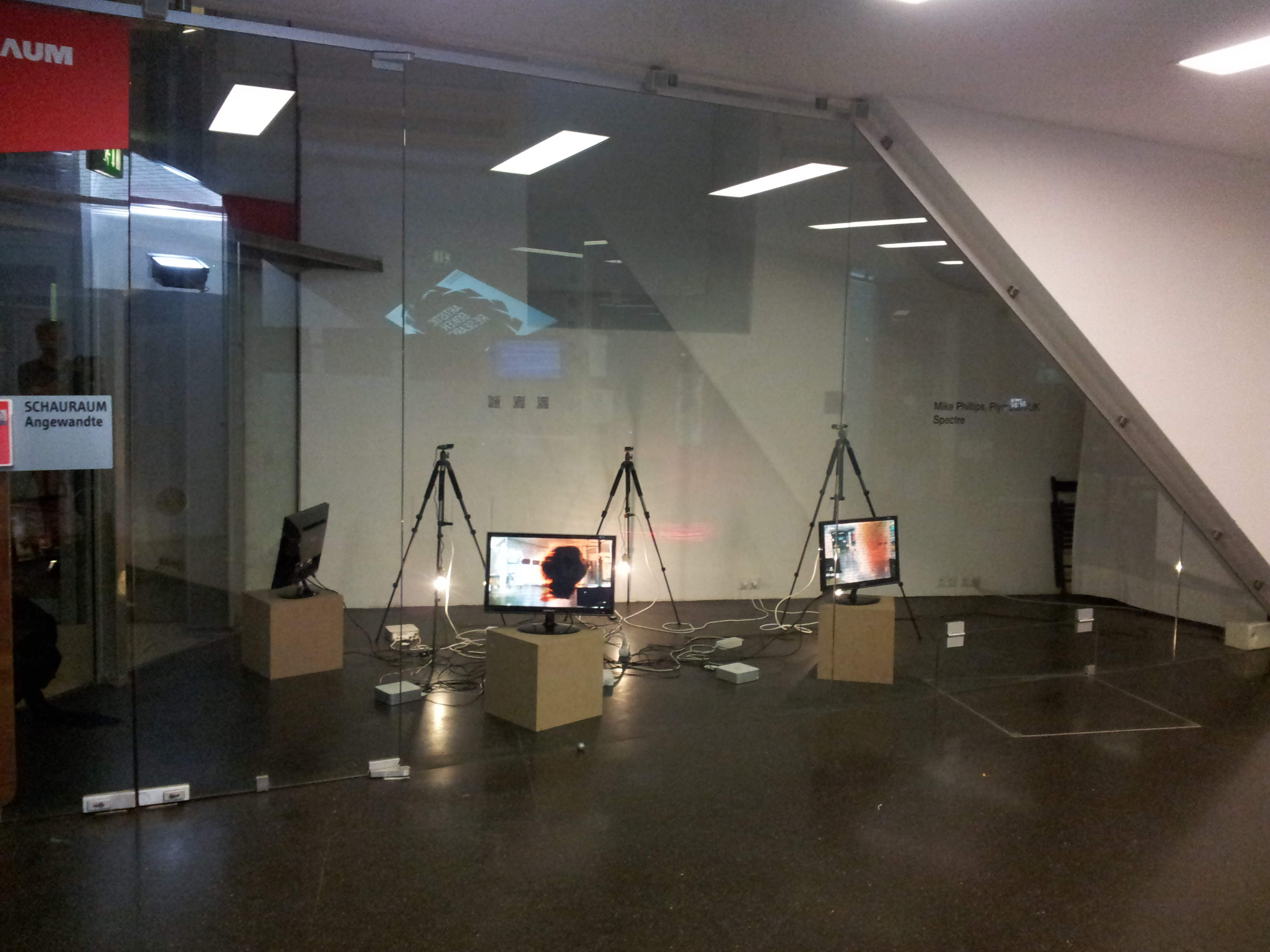 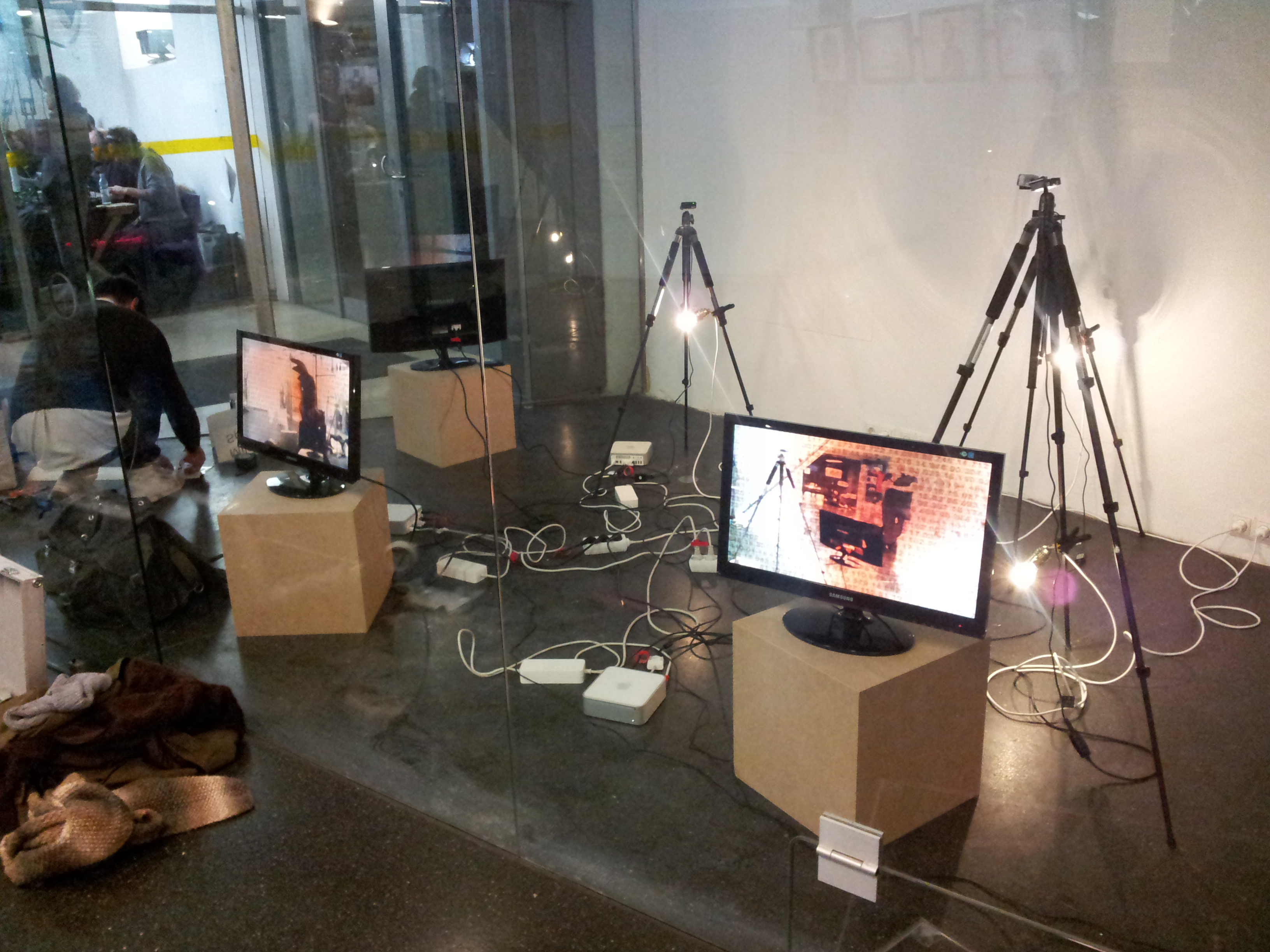 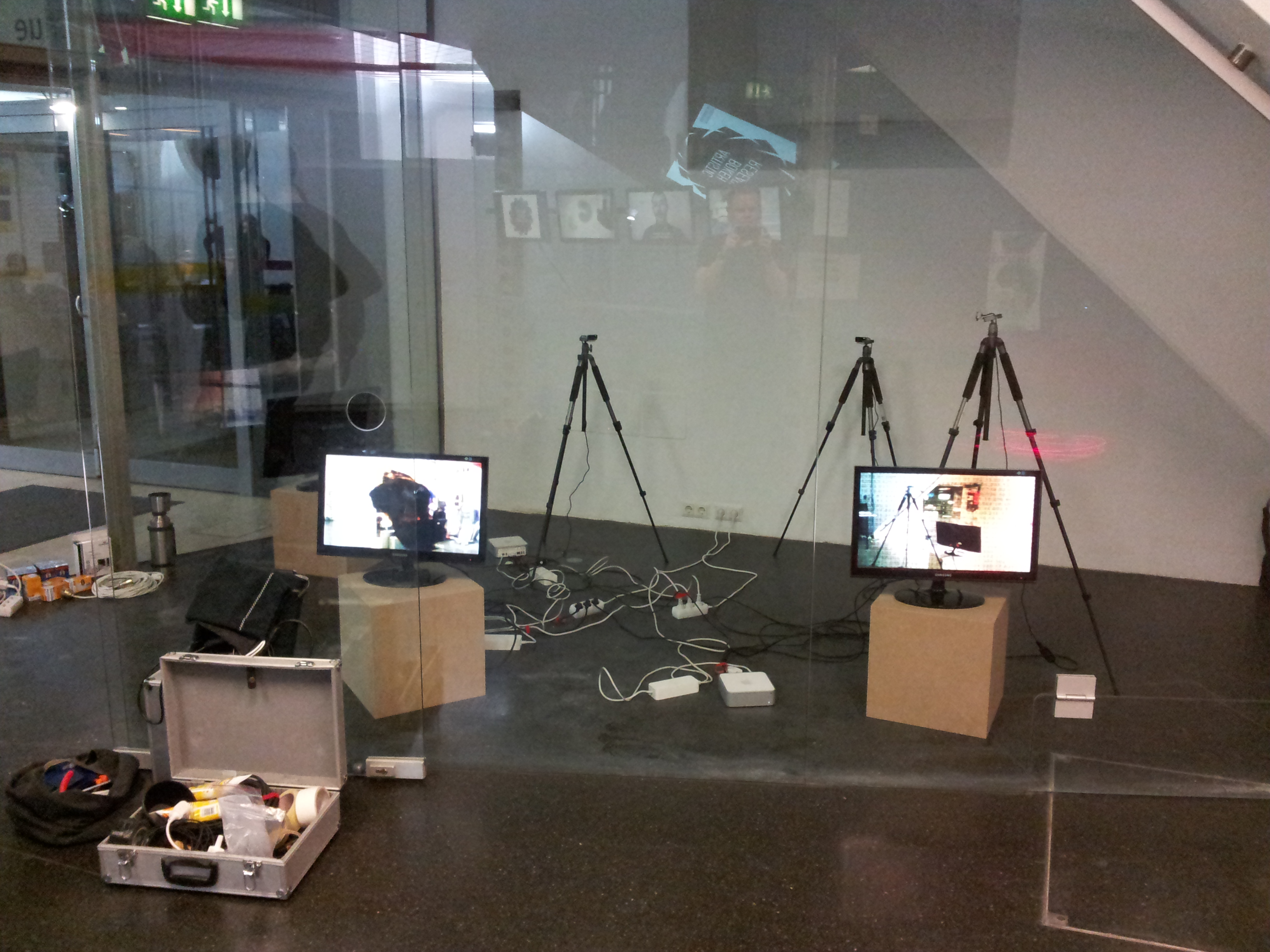 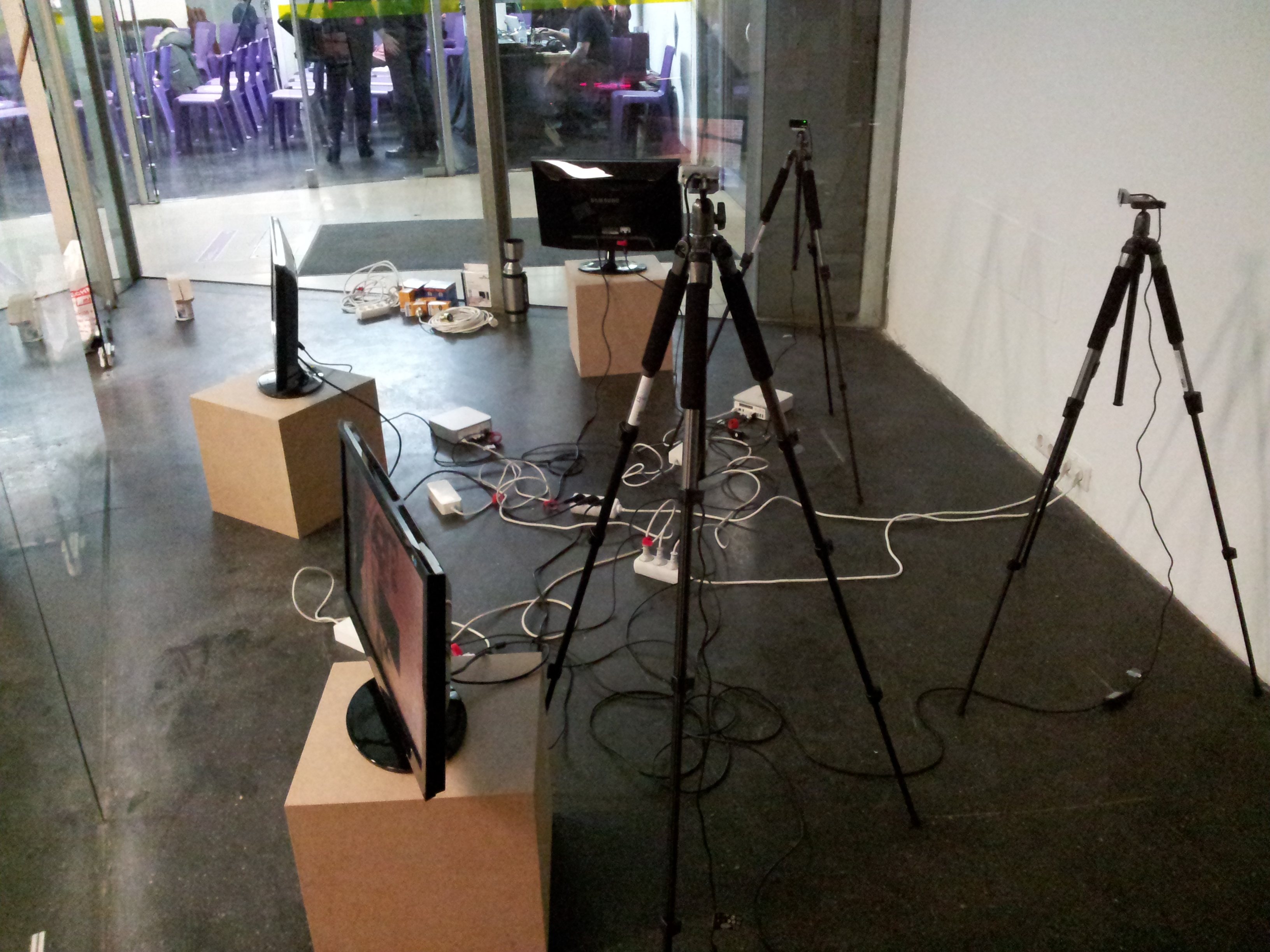 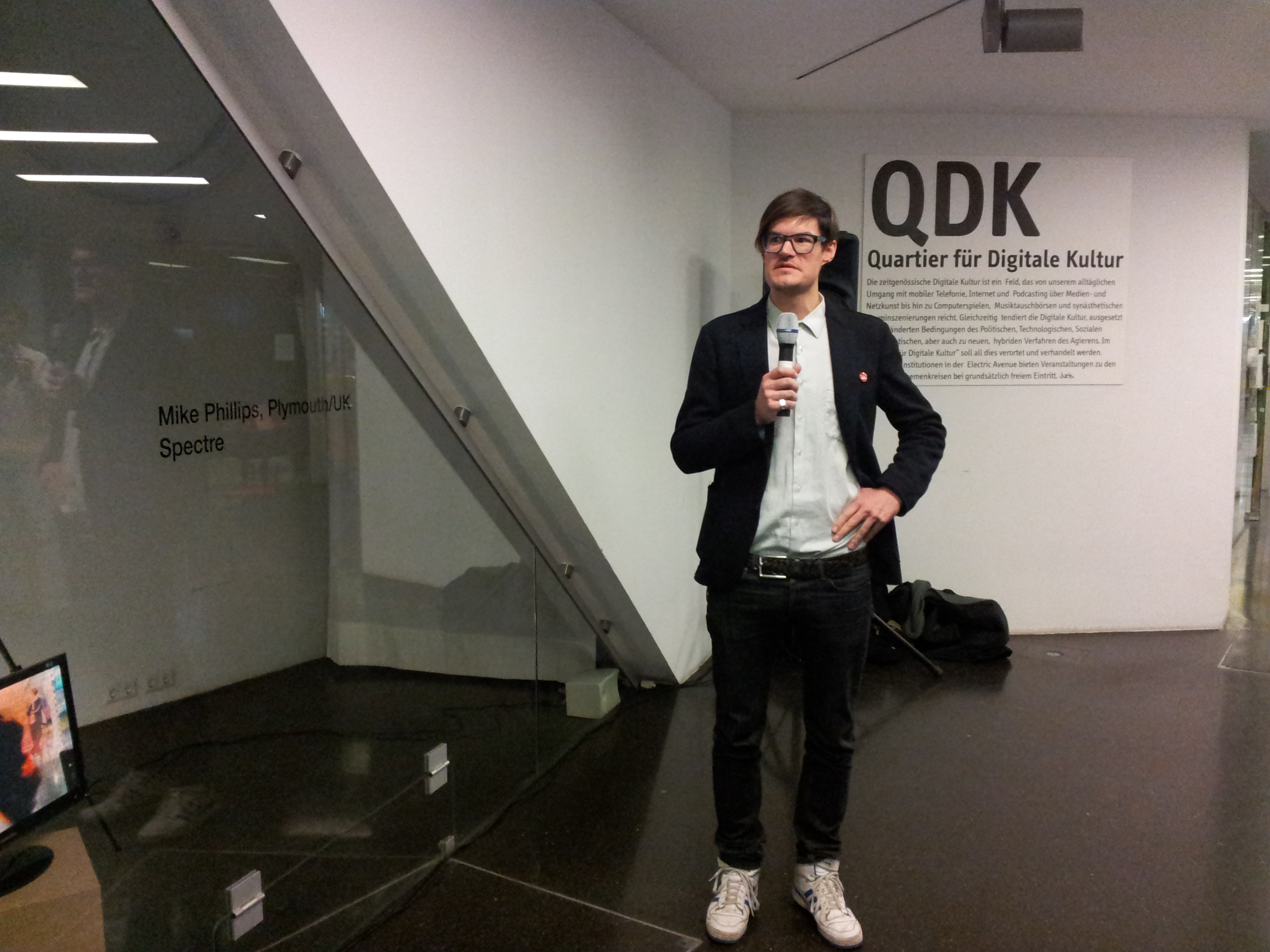 Chris Saunders at i-DAT for the coding

Wolgang Fiel for the Ghost hunting

Professor Genhua Pan at the Wolfson Nanotechnology Laboratory at Plymouth University, for the AFM scan.

USB leads from the webcams to the mac minis.

1 x audio system (loud enough to just be heard outside the closed glass box). Will be plugged into the fastest mac mini.

Simple white plinths for the monitors to be just below eye height.